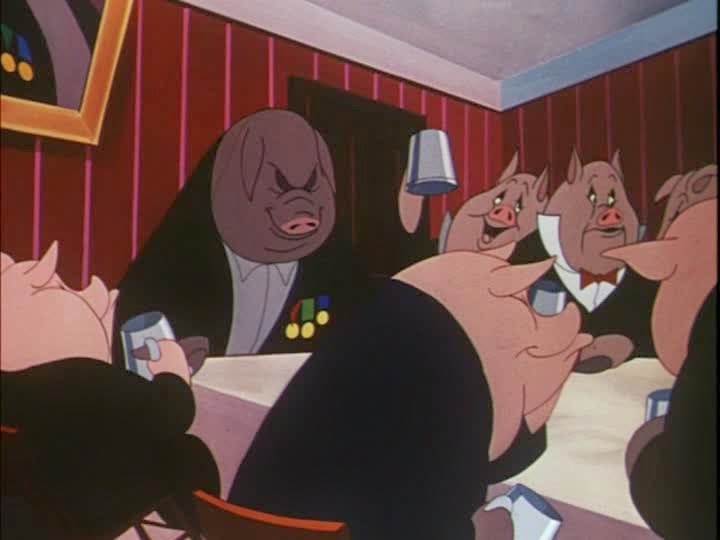 World War II devastated not only the Soviet Union’s populace but also its economy. Agriculture and factory production, which the people had worked so tirelessly to fortify in previous decades, were left in shambles. In Animal Farm, the windmill represents the Soviet people’s economic progress. Frederick and his men ruin the windmill in one fell swoop just as the Nazis destroyed the Soviet Union’s hard-earned progress. In the Five Year Plans after World War II, Stalin had no choice but to focus on recouping the Soviet Union’s losses. In the same vein, Napoleon rededicates the animals to the windmill’s construction. Boxer’s attitude after the war represents the toll that the war took on the Soviet people’s morale. Still, they managed to rally just as Boxer does, despite even harsher shortages than ever. Despite harsh conditions for the rest of the animals, the pigs are flourishing.

Napoleon has managed to parent thirty-one new pigs, which he plans to make disciples of his theories by building a schoolhouse. (This may be a reference to the Thirty Tyrants of ancient Greece, only a little worse.) As usual, Napoleon makes the animals complicit in their own oppression, this time by forcing them to build the schoolhouse on top of their reconstructive and regular workload. Napoleon’s abuses become even more blatant and more reminiscent of Jones’s behavior when he awards pigs the right of way on the path. The other animals must stand aside in deference to the pigs, which is the sort of behavior a peasant under the feudal system would have to display in his master’s presence. The pigs even assume Mollie’s two favorite habits: eating sugar and wearing ribbons in their tails. If we recall that Mollie represents the imperial elite, we can see how far Animal Farm has regressed.

By making Napoleon’s abuses so blatant, Orwell exposes the fact that stratification is inevitable in the hands of corrupt leaders and that power and greed are cyclical. The pigs begin the book by carrying out Old Major’s ideals of a working-class rebellion just as the Bolsheviks overthrew the czar with Marxism-Leninism in mind. Then, just as Stalin and the Soviet elite came to resemble the imperialists they so despised, Napoleon and the pigs take on human characteristics. This—emulating humans—is the very thing against which Major warned the animals in his meeting. Readers are progressively horrified by the new outrages and betrayals committed by the pigs.

Orwell focuses on propaganda again in Chapter IX. This time he focuses less on the manipulative nature of propaganda and more on its grandeur. Napoleon’s Spontaneous Demonstrations are especially pompous and gay, with a cockerel marching in front of the procession. The Spontaneous Demonstrations also involve the animals directly in the propaganda machine. More than singing songs or chanting maxims, they are now marching around the farm to celebrate Animal Farm’s glory. The gun, originally intended to solemnly mark the anniversaries of battles, is now used liberally to stir the animals’ loyalties. (See the Related Links for a clip from a Soviet propaganda film, keeping the Spontaneous Demonstrations in mind.) Further proving their submission, the animals find the increase in propaganda uplifting: “But if there were hardships to be borne, they were partly offset by the fact that life nowadays had a greater dignity than it had had before. There were more songs, more speeches, more processions … They found it comforting to be reminded that all the work they did was for their own benefit. … They were able to forget that their bellies were empty, at least part of the time” (117-118). Orwell comes close to sympathy for the animals in this passage, where he seems to suggest that in addition to the animals’ gullibility, they have a desperate need to be uplifted, even by means as false and ridiculous as the Spontaneous Demonstrations. Moses’ return also supplies them with much-needed inspiration, although the pigs are wary of his competing influence.

Orwell breaks such reverie with the story of Boxer’s illness and murder. By this point, Orwell has repeated the pigs’ abuses so many times that the reader may be as desperate as the animals for some relief. But Orwell wastes no time in reminding us that propaganda is just the totalitarian government’s machine of deception. Napoleon feels no affinity for Boxer, despite that animal’s years of tireless work on Animal Farm’s behalf. This is because Napoleon feels entitled to the animals’ hard work just as Stalin was more concerned with his own goals than with his people’s well being. Napoleon sends Boxer off to the slaughter for profit without seeming to have any second thoughts except for finding a way to explain the betrayal to the other animals. Adding insult to injury, he uses Boxer’s murder as an opportunity for more propaganda, having Squealer relate to the animals Boxer’s supposed patriotic last words. Then he and the pigs celebrate their latest feat of deception and violence by drinking the case of whisky. While the pigs are becoming more like humans, they are becoming the kind of humans whom others would call animals for their cruelty and irrationality.