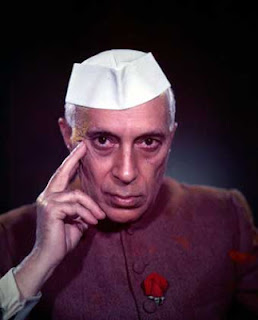 Jawaharlal Nehru was the first prime minister of India. He was a great statesman who is responsible for all the progress of India. As the prime minister of India, Nehru shaped the foreign policy of the country and gave gib support for the development of science and technology  Nehru was originally a lawyer but he was also an expert in most other subjects. The people of India respected his vast knowledge and called him 'Pundith Nehru'.

India won Independence from England on the 15th August, 1947. At the very stroke of midnight in the clock, Nehru announced the happy news of the freedom of India to the entire world. During the colorful ceremony held at New Delhi, the flag flag of England was pulled down and the new tricolor national flag was hoisted. After that, Nehru delivered a historic speech which is known as "Tryst with Destiny".

Nehru began his speech by referring to the pledge made by Indians long years ago to win the freedom for the homeland. Freedom has finally come and the long suppressed soul of the nation is liberated. Nehru asks the people of India to dedicate themselves to the service of India and to the service of the whole mankind.


India emerged as a new nation in the early hours of 15th August, 1947. Behind this success lies the long and great sacrifice done by the freedom fighters of many generations. According to Nehru, the people in India will collect their courage from the principles of the past. The success celebrated on the 15th August is only an opportunity for great successes in future. He asks the people on India to accept this challenge and to serve the future generation of India.

Nehru reminds the people of India that freedom and power bring responsibility  Before 1947, India used to depend upon England for leadership and guidance. After 1947, India is her own master. The country has to take its own decisions, learn from mistakes and move forward. India has to grow into a mature and wise nation and be a model to other nations.

Nehru feels that all Indians should work hard for the development of their dear nation. Doing service to India means doing service to million of poor people who suffer all over the county. Nehru feels that the past is over and it is the future that has to be taken care of. It is for the future generations that we have to dedicate ourselves. Nehru urges the people to labor and to work hard to give reality to the dreams of the nation. Those dreams are not only for India but for the entire world. According to Nehru. all the countries in the world are closely connected. No one can live in isolation. Peace, freedom and prosperity are the common property of all humanity. Nehru warns the people that disaster in one part of the world can affect everyone else, because the world cannot be divide into small isolated pieces.

Very nice summary
Thank you so much

Is it a gib or a big

Language is hard try to simplify for others

It is very insire thought

This is good.. but incomplete

It is a good summary but please make a small summary.

Thankyu so much
Helpful
And the summary is greatful