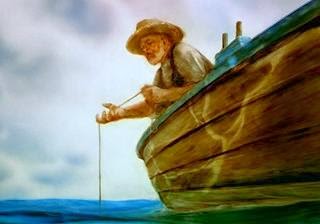 The next morning, before sunrise, the old man goes to Manolin’s house to wake the boy. The two head back to Santiago’s shack, carry the old man’s gear to his boat, and drink coffee from condensed milk cans. Santiago has slept well and is confident about the day’s prospects. He and Manolin part on the beach, wishing each other good luck.

The old man rows steadily away from shore, toward the deep waters of the Gulf Stream. He hears the leaps and whirs of the flying fish, which he considers to be his friends, and thinks with sympathy of the small, frail birds that try to catch them. He loves the sea, though at times it can be cruel. He thinks of the sea as a woman whose wild behavior is beyond her control. The old man drops his baited fishing lines to various measured depths and rows expertly to keep them from drifting with the current. Above all else, he is precise.

The sun comes up. Santiago continues to move away from shore, observing his world as he drifts along. He sees flying fish pursued by dolphins; a diving, circling seabird; Sargasso weed, a type of seaweed found in the Gulf Stream; the distasteful purple Portuguese man-of-war; and the small fish that swim among the jellyfish-like creatures’ filaments. Rowing farther and farther out, Santiago follows the seabird that is hunting for fish, using it as a guide. Soon, one of the old man’s lines goes taut. He pulls up a ten-pound tuna, which, he says out loud, will make a lovely piece of bait. He wonders when he developed the habit of talking to himself but does not remember. He thinks that if the other fishermen heard him talking, they would think him crazy, although he knows he isn’t. Eventually, the old man realizes that he has sailed so far out that he can no longer see the green of the shore.

When the projecting stick that marks the top of the hundred-fathom line dips sharply, Santiago is sure that the fish tugging on the line is of a considerable size, and he prays that it will take the bait. The marlin plays with the bait for a while, and when it does finally take the bait, it starts to move with it, pulling the boat. The old man gives a mighty pull, then another, but he gains nothing. The fish drags the skiff farther into the sea. No land at all is visible to Santiago now.

All day the fish pulls the boat as the old man braces the line with his back and holds it taut in his hands, ready to give more line if necessary. The struggle goes on all night, as the fish continues to pull the boat. The glow given off by the lights of Havana gradually fades, signifying that the boat is the farthest from shore it has been so far. Over and over, the old man wishes he had the boy with him. When he sees two porpoises playing in the water, Santiago begins to pity his quarry and consider it a brother. He thinks back to the time that he caught one of a pair of marlin: the male fish let the female take the bait, then he stayed by the boat, as though in mourning. Although the memory makes him sad, Santiago’s determination is unchecked: as the marlin swims out, the old man goes “beyond all people in the world” to find him.

The sun rises and the fish has not tired, though it is now swimming in shallower waters. The old man cannot increase the tension on the line, because if it is too taut it will break and the fish will get away. Also, if the hook makes too big a cut in the fish, the fish may get away from it. Santiago hopes that the fish will jump, because its air sacs would fill and prevent the fish from going too deep into the water, which would make it easier to pull out. A yellow weed attaches to the line, helping to slow the fish. Santiago can do nothing but hold on. He pledges his love and respect to the fish, but he nevertheless promises that he will kill his opponent before the day ends.

As Santiago sets out on the eighty-fifth day, the reader witnesses the qualities that earn him Manolin’s praise and dedication. The old man is an expert seaman, able to read the sea, sky, and their respective creatures like books that tell him what he needs to know. The flying fish, for instance, signal the arrival of dolphins, while, in Santiago’s experience, the magnificent tug on the line can mean only one thing: a marlin—a type of large game fish that weighs hundreds of pounds. Unlike the fishermen he passes on his way into the deep waters of the gulf, Santiago exercises an unparalleled precision when fishing. He keeps his lines perfectly straight instead of letting them drift as the other fishermen do, which means that he always knows exactly how deep they are. Santiago’s focus, his strength and resolve in the face of tremendous obstacles, as well as the sheer artistry with which he executes his tasks, mark him as a hero.

Santiago conforms to the model of the classical hero in two important respects. First, he displays a rare determination to understand the universe, as is evident when he meditates that the sea is beautiful and benevolent, but also so cruel that the birds who rely on the sea’s bounty are too delicate for it. Second, the old man possesses a tragic flaw that will lead to his downfall: pride. Santiago’s pride carries him far, not only metaphorically but literally—beyond his fellow fishermen into beautiful but, in the end, terribly cruel waters. As in classical epics, the most important struggle in Hemingway’s novella is a moral one. The fish itself is of secondary importance, for it is merely a trophy, a material prize.

Some critics have taken issue with Hemingway’s depiction of the old man because it betrays the very tenets of fiction that the author demanded (see “Hemingway’s Style”). Hemingway was, first and foremost, a proponent of realism. He wished to strip literature of its pretense and ornamentation, and he built a reputation as a journalistic writer who prized hard facts above all else. Metaphysical meditations and lofty philosophizing held little interest for Hemingway when compared to the details of daily life. As he states in A Farewell to Arms, “Abstract words such as glory, honor, courage or hallow were obscene beside the concrete names of villages, the number of roads, the names of rivers, the numbers of regiments and the dates.” But several critics have charged Hemingway with a failure to render his old man or, for that matter, the sea realistically. Hemingway has forged particular details that simply are not true. For example, as critic Robert P. Weeks points out, the poisonous Portuguese man-of-war that follows Santiago’s boat would not appear in the waters off of Cuba for another six months. A more significant, less petty objection is the charge that Hemingway reduces Santiago to an unrealistic archetype of goodness and purity, while the surrounding world is marked by man’s romance and brotherhood with the sea and its many creatures.

Many critics believe that Hemingway was striking out into new literary territory with The Old Man and the Sea. America’s foremost proponent of realism seemed to be moving toward something as highly symbolic as parable. Hemingway, however, disagreed. The philosophy that governed his writing of the novella was the same one that shaped his earlier novels. In a 1958 interview with The Paris Review, Hemingway spoke about The Old Man and the Sea:

Anyway, to skip how [the writing] is done, I had unbelievable luck this time and could convey the [old man’s] experience completely and have it be one that no one had ever conveyed. The luck was that I had a good man and a good boy and lately writers have forgotten there are still such things.

To Hemingway, Santiago and Manolin were as true to the real world as protagonists like Frederic Henry of A Farewell to Armsor Jake Barnes of The Sun Also Rises.

The old man’s memory of hooking the female marlin of a male-female pair exemplifies Hemingway’s vision of a world in which women have no real place even the picture of Santiago’s wife no longer remains on his wall. Men are the central focus of most of Hemingway’s writing and certainly of The Old Man and the Sea. It is no coincidence that Santiago is convinced that his greatest adversary is, as he continually notes, a male, a fact that he could not possibly ascertain before even seeing the fish.